Galaxies form and evolve in their large-scale dark matter environment. Here at Tsinghua Astronomy, our researches focus on three main categories according to the scale of the research objects, i.e., the internal structure of galaxies, the dark matter and hot gas environment of galaxies, and the large scale structure and cosmology. These studies, based on frontier observations, various theories and state-of-the art numerical simulations, are all carried out closely around the big projects that are led and conducted at DoA, i.e., the Hot Universe Baryon Surveyor (HUBS) and the Southern Spectroscopic Survey Telescope (SSST), as well as the new technology developments on X-ray spectroscopy and polarimetry, which are also led and performed at DoA. We have also been deeply involved in key large-scale galaxy surveys (e.g., SDSS-IV, JCMT, PSF, DESI and LSST). All these provide us with immense data platform to test novel modelling methods, and valuable observational evidence to constrain innovative theoretical models. 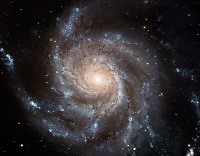 A galaxy is composed of a variety of components including stars, ionized hot gas surrounding massive stars, and interstellar medium (ISM) which is distributed ubiquitously within the galaxy and is a mixture of dust grains and cold gas in form of both atoms and molecules. In addition, the supermassive black hole (SMBH) sitting in the center of most (if not all) galaxies, is continuously growing mass through accreting gas (and sometimes even stars) from the host galaxy or intra-galactic medium. Star formation is the most fundamental piece of physics for a galaxy. Its condition and status subtly rely on many galaxy properties and is most directly related to the accretion of cold gas. Energy feedback from both stellar death and the central SMBH accretion may significantly influence the gas cooling and star formation processes in the galaxy, while the underlying dark matter distribution regulates both the dynamics of various components and the overall matter accretion for the fuel of both star formation and SMBH growth. It is important to measure the different components of large samples of galaxies, and statistically study how they interplay with each other, in order to have a full picture of different types of galaxies as a whole. Here at Tsinghua, we have observation surveys, in both optical (e.g. SDSS-IV/MaNGA, thus probing spatially-resolved stellar, ionized gas and dust components) and radio (e.g. JCMT/JINGLE, thus probing molecular gas component), as well as theoretical expertise which enable us to extensively study the baryonic composition of galaxies. We're particularly interested in understanding the star formation quenching process, cold gas accretion and black hole-driven nuclear activity in galaxies. 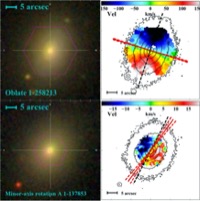 The next decade will be a great time for galactic dynamics. The GAIA satellite will provide kinematical information for one billion of stars in the Milky Way; LAMOST will also provide information for millions of fainter stars. SDSS-IV/MaNGA will provide resolved kinematics for 10,000 nearby galaxies (finishing by the end of 2020). Currently instruments like MUSE on 8-10m telescopes are providing more detailed kinematic information about high-redshift galaxies, which is also a key science goal for future 30m class telescopes. How to go from these datasets to dynamic models of galaxies remains a huge challenge theorists are yet to meet. We are particularly interested in exploring these huge data sets, together with high-resolution numerical simulations, to understand the mass (including dark matter) distribution and orbit structures in galaxies, and how we can use the chemo-dynamical information to understand the formation and evolution of galaxies.


2. The dark matter and hot gas environment of galaxies

Based on our current understanding, all galaxies in the Universe formed out of the collapsed and cooled gas at the center of dark matter halos. Dark matter halos determine the fate of galaxies. To gain more insights about how galaxies form and evolve, we must seek to understand the galaxy-halo connection better. Meanwhile, galaxies can help us map the distribution of dark matter halos and their clustering properties, which are crucial information for cosmology. We rely on an accurate galaxy-halo connection model to correctly decode this cosmological evidence. In the foreseeable future, the galaxy-halo connection will remain under the spotlight of both extragalactic astrophysics and cosmology. In observation, we will advance the statistical constraints of the abundance and clustering of different types of galaxies. Tsinghua will utilize data from the SDSS, on-going DESI, and the forthcoming PFS survey to conduct relevant research. At the same time, the weak lensing technique has become an essential tool for cosmology after rapid development in recent years. Tsinghua will also take advantage of the unprecedented lensing capability enabled by modern photometric surveys to map the distribution of dark matters around galaxies. Altogether, these observations will deepen our understanding of galaxy-halo connection. 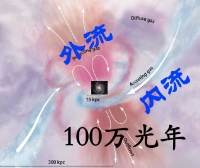 Recently, the study of CGM/IGM is rapidly developing. A new paradigm has been established for the accretion of gas onto dark matter halos to fuel star-formation within the cosmological build-up of large-scale structures. The standard model envisions that galaxies are fed by cool 'streams' of gas, linked to the surrounding IGM by a web of cosmic filaments. Furthermore, observations have confirmed that the majority of cosmic baryons reside within CGM and IGM. In this context, IGM would be the pristine gas reservoir which channels through CGM and eventually fuel star formation activities inside a galaxy; the latter could in return pollute and heat the CGM/IGM, via outflows of material and energy driven by supernovae and/or the central black hole, to increase the metallicity and temperature of the gas on large scales. However, fundamental questions remain, regarding the spatial distribution and properties of CGM/IGM, physics of feedback processes, IGM-galaxy interactions, and so on. Here at Tsinghua, we aim at revealing the CGM and IGM environment using X-ray, S-Z, Ly-alpha, and metal-line observations and understanding the connection between galaxies and large scale structures in the Universe. 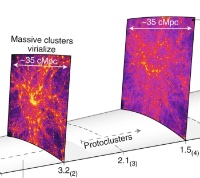 How cosmic fluctuations turn into structures and galaxies on large scales is one of the fundamental questions of both theoretical and observational cosmology. People have observed clusters at z ~ 2 with a hot X-ray emitting intracluster medium (ICM), indicating the formation stage of these clusters and their progenitors (e.g., protoclusters) should be earlier than z = 2. The clusters/protoclusters at z = 2 - 3 are excellent laboratories for understanding structure formation: (1) determining the mass and abundance of the cluster progenitors are crucial for understanding the hierarchical growth in cosmic structures. (2) overdensities at z = 2 - 3 are excellent laboratories to study the emergence of the environmental dependence of galaxy properties, e.g., the density enhancement or quenching of star-formation rate (SFR). (3) Protocluster regions provide us excellent sites to study the assembly and evolution of massive galaxies. In turn, the formation of massive galaxies can be used to strongly constrain the assembly history of clusters. (4) Protoclusters provide unique regions to examine interactions of galaxies with the densest part of the intergalactic medium. 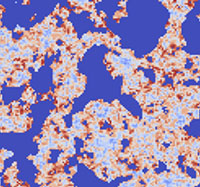 The epoch of reionization is a period in the history of the Universe during which the intergalactic hydrogen gas went from being neutral to ionized. This watershed event was powered by the emergence of the first luminous objects when the Universe was a few hundred million years to a billion years old ("cosmic dawn"). The cosmic reionization can be probed indirectly by the cosmic microwave background, the Lyα forest, the Lyα emitter, but the most promising breakthrough is very likely yet to be done by the observation of hydrogen 21-cm emission line. We make cosmological reionization simulations using our radiative transfer code, as well as running semi-numerical simulations, to understand how reionization proceeds and finishes and what is the fingerprint on the statistical observables. We also apply the machine learning techniques for developing new methods of scientific interpretation of observational 21-cm data from upcoming large radio interferometric array experiments such as the Square Kilometre Array (SKA). 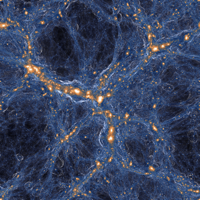 Large-scale distribution of galaxies and matter

As building blocks of the observational Universe, galaxies are found to closely trace the distribution of dark matter over a wide range of scales. Therefore the distribution of galaxies has been long used as one of the important cosmological probes for tracing and constraining the cosmic matter density field. On the other hand, the environment of different scales must have influenced both the assembly history of dark matter halos and the formation and evolution of galaxies. Thanks to the increasingly large and deep surveys, the large-scale distribution of galaxies has been measured extensively using statistics such as two-point correlation functions and power spectra, and these measurements have revealed anisotropic distribution of dark matter over scales up to 100Mpc or larger. This must be corresponding to the filamentary structure of the mass density field. At Tsinghua we're interested to statistically quantify such anisotropy in the large-scale structure using current and future surveys like SDSS, DESI,PFS and SKA, and to use the observational measurements to constrain galaxy formation and LSS formation models. 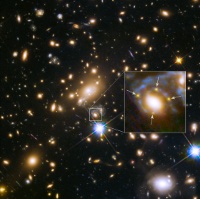 Gravitational lensing is one of the most powerful tools in the field of Astrophysics and Cosmology. Loosely speaking, gravitational lensing refers to the fact that light rays from a distance source are deflected and distorted by intervening mass distributions. It probes matter distributions at all scales from stars to galaxies to large scale structures in the Universe. Such studies not only help us to unveil the physics of the formation and evolution of cosmic structures, but also provide us with crucial clues to the understanding of many fundamental physics questions, such as the nature of the dark sectors of the Universe as well as gravity. Here at Tsinghua, we are primarily interested in understanding dark-matter substructure strong lensing and its implication on the nature of dark matter. In the future, we will also study methods to identify more gravitational lenses in large surveys, and how we can use them for a variety of purposes.