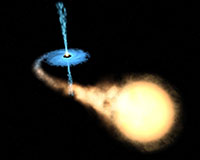 Commonly refer to astronomical systems that contain a black hole, a neutron star, or a white dwarf. Some of the brightest X-ray or gamma-ray sources belong to this population of sources, which are thus of great significance in the field of high energy astrophysics. We are mainly interested in black hole sources, including X-ray binaries that contain a stellar-mass black hole, X-ray transients (including gamma-ray bursts, tidal disruption events, etc), and active galactic nuclei that contain a super-massive black hole. These sources are powered by the accretion of matter either from a companion star or from the environment surrounding a black hole. In some cases, highly-collimated jets of particles are seen moving at relativistic speeds. We study the physics of accretion and particle acceleration, as well as relativistic effects near black holes, through X-ray and gamma-ray observations.

Accretion is an important source of energy in the universe. In theory, due to the balance between radiation force and gravity, the radiation powered by accretion may have an upper limit, referred to as the Eddington limit. What will happen when the mass accretion rate is beyond the critical value that is just needed to power the Eddington limit? This is one of the key questions in high energy astrophysics. It is extremely difficult to obtain analytic solutions for such a problem as radiation magnetohydrodynamics (RMHD) is involved. Combining analytic analysis, nemerical simulations, and observational data, we aim to understand how matters are accreted, how outflows are formed, and how the environment is impacted in the context of supercritical accretion. So far, we have revealed observational evidence for the presence of massive winds driven by supercritical accretion. In the future, we are trying to build theoretical models, in combination with 3D RMHD numerical simulations, to further understand the underlying physics.

Cosmic-rays are energetic charged particles that prevail the universe. They are the outcome of extreme (i.e., eruptive and explosive) astrophysical phenomena, can reach energies well beyond those achievable on Earth, and have profound influences to the evolution of galaxies and beyond. How does the universe manage to efficiently accelerate particles to such extreme energies? How do such particles propagate and escape? What are the essential microphysical processes behind cosmic-ray feedback? In Tsinghua, we address these fundamental questions by carrying out detailed simulations from first principles.