Within the past few decades, over 4,000 planets have been found outside of the solar system. These exciting discoveries have made exoplanet science one of the most rapidly growing fields in astrophysics. Thanks to a variety of recent and upcoming observational facilities, as well as advanced theoretical and computational tools, the door has opened to our generation of astronomers, to address many fundamental questions that have puzzled people for centuries. How common are planets around other stars? Is our solar system typical? Are there other habitable worlds beyond the Earth? What are the fundamental physical principles that drive planet formation? Why do planets differ from each other in our solar system and beyond? Can we find evidence towards origins of life?

At Tsinghua, we have many research lines that strive to answer these questions. For the observational side we are deeply involved in detecting exoplanets with a variety of methods: precision radial velocity, microlensing, transits, and statistical analyses of the exoplanet population. For the theoretical side we are running high-performance computer simulations to study the environment in which planets form - protoplanetary disks, and we are experts on developing models that cover the variety in scales that planet formation entails.

1. Detection and characterization of exoplanets

The exoplanet observers at Tsinghua employ three major detection techniques to search for exoplanets and characterize their properties. First, we use microlensing, which measures the deflection and magnification of light under gravity to detect astronomical objects including exoplanets. This method is particularly sensitive to detecting cold planets (with large orbital radii), which can be powerful in constraining theories of planet formation. We are actively involved in leading microlensing surveys (e.g., KMTNet and Las Cumbres Observatory) as well as the planning of future space-based missions. The second technique that we use is the radial velocity (RV) method, which measures the RV changes of the host star caused by the gravitational pull of the unseen planet, from which one can planetary mass. Tsinghua astronomers have employed and improved the RV technique, and have access to state-of-the-art observational facilities such as the Planet Finder Spectrograph on Magellan and the SPIRou spectrometer on the Canada-France-Hawaii Telescope (CFHT). Such combination has made it possible, after decades of effort, to detect true Earth analogs around nearby Sun-like stars. Finally, we use the transit method, which measures the slight, periodic dimming of the host star when it is eclipsed by an unseen planet, and thus determining planet radius. Tsinghua astronomers use the TESS satellite and ground-based telescopes such as Las Cumbres Observatory to search for transiting planets, after which the RV method can be used to measure planetary masses, and constrain the planetary interior and atmosphere models. Combining these methods, we are pushing the boundaries for exoplanet detection, anticipating discovering more unique planetary systems, especially those analogous to our own solar system. 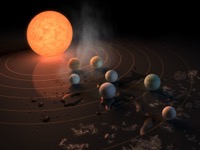 Similar to our Solar system, extra-solar systems likely harbor planets of very different kinds: from close-in small terrestrial planets to distant gas giants. The early-stage formation and the late-stage evolution of the planets around the same host are likely correlated in some way. Therefore, the architecture of the planetary system, namely the number and properties (e.g., mass, radius, orbital period) of the planets inside the same system, conveys crucial information about the past history of the system. However, because of observational biases, the simple ensemble of all detected planets do not reflect the underlying distribution. Tsinghua astronomers apply advanced data mining and statistical tools to large data sets, and combine data sets from several detection techniques (e.g., transit, RV, microlensing) to reveal the intrinsic architecture of planetary systems. This will provide us with stringent constraints on planet formation theories. We are specifically interested in the prevalence of planetary systems with architectures similar to our solar system. This is a scientific version of the philosophical question: Are we alone in the Universe?

The theory of planet formation studies the conversion of the dust and gas, present at the early phases of disks, into the planets and planet systems that we see today. At small scales micron-sized dust particles coagulate or collapse into larger bodies (pebbles and planetesimals), driven by aerodynamical and surface forces. At larger scales, gravity becomes responsible for growth. Modeling planet formation requires a thorough understanding of the underlying physics -- collision physics of solid bodies, aerodynamics of dust particles, N-body dynamics, disk and planet thermodynamics, to name a few. Examples of state-of-the art research fields that we are pursuing at Tsinghua are the formation of planetesimals out of small particles (the so-called streaming instability), the growth of planets by pebble-sized particles (pebble accretion), how planets acquire their atmospheres, and the emergence of entire exoplanet architectures. In this way, we not only study formation of individual planets, but also add context to the observed population of exoplanets and their systems, revealing the conditions under which planets form. 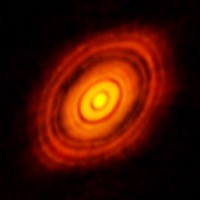 4. The physics of protoplanetary disks

Protoplanetary disks are gaseous disk orbiting newly formed stars, in which planets are born. Almost all stages of planet formation, which take place within the disk lifetime of a few million years, crucially depend on disk physics. Particularly important factors are the disk structure in terms of density, temperature, chemical composition, etc., and the flow structure in terms of accretion, turbulence, outflows, etc., as well as how they evolve in time. In recent years, our knowledge about disks has been revolutionized thanks to a fleet of advanced observational facilities with superb spatial resolution and sensitivity, especially by ALMA, revealing surprisingly rich disk substructures that appear to be ubiquitous among disks. The rapidly mounting observational discoveries constantly challenge our understandings of disk physics, which represent a major obstacle to studying planet formation. At Tsinghua, we primarily pursue theoretical and computational studies of disk physics, which are the outcome of the complex interplay between magnetic fields, radiation, chemistry, and potentially newly formed planets in a weakly ionized, dusty gaseous disk. By utilizing and developing state-of-the-art tools, especially through high-performance computing, we aim to address a series of fundamental questions, such as what sets the initial conditions of disks? What drives disk accretion and evolution at various stages across different radii? How do disks spontaneously form substructures? Answers to these questions will provide crucial clues to help us better understand the formation and diversity of planetary systems.