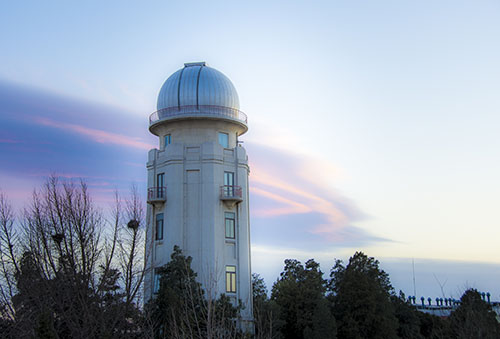 Astronomy is one of the oldest science disciplines, spanning the widest ranges in space and time. With the advent of new telescopes and detector technology, astronomy is now entering a new golden age: the direct detection of gravitational wave in 2015 and the first picture of a black hole demonstrated the immense charm of the heaven, arousing huge interests from the public.


The Department of Astronomy (DoA) of Tsinghua University builds on the Tsinghua Center for Astrophysics, which was established in 2001 with Prof. Tipei Li as the founding director. The center was housed within the Department of Physics but also with faculty from other departments. Under the leadership of Prof. Li (2001-2010) and Prof. Charling Tao (2010-2014), the center grew steadily, with a primary focus on high-energy astrophysics and compact objects. The center trained a number of excellent students during this period. From 2014-2019, with the support of the University, the center entered a phase of more rapid growth, with Shude Mao being the director. The center ventured into two new areas, galaxy and cosmology, and exoplanets, resulting in more balanced research areas and faculty age distributions. With the expansion, the University decided to establish a new Department of Astronomy; the inaugural ceremony was held on April 21, 2019. The next few years will witness an exciting time ahead for the DoA. A major expansion will take place, aiming to recruit at least 10 more faculty members internationally by 2025. Every year we also expect 10-15 graduate students will enroll in our PhD program, and within a few years our undergraduate program will commence operations.


In the future, the Department of Astronomy will further develop with the following goals: First, in terms of faculty recruitment, we will give priority to three directions: high-energy astrophysics, galaxy and cosmology, and exoplanets. At the same time, we will also watch out other emerging areas in astrophysics. Secondly, together with domestic and international partners, we will take advantage of Tsinghua’s strong engineering disciplines to develop astronomical instrumentation, and play leadership roles in selected ground-based telescope and space satellite projects. Third, we will strive to create a world-class intellectual environment, build an efficient administrative support, form the unique culture of the Tsinghua Astronomy: striving for mutual respect, mutual support, and openness.

The future of Tsinghua astronomy depends critically on the recruitment of outstanding talent to whom we welcome with open arms. We will seize the historic opportunity to make Tsinghua a worldwide center of excellence in astronomy in the next decade.