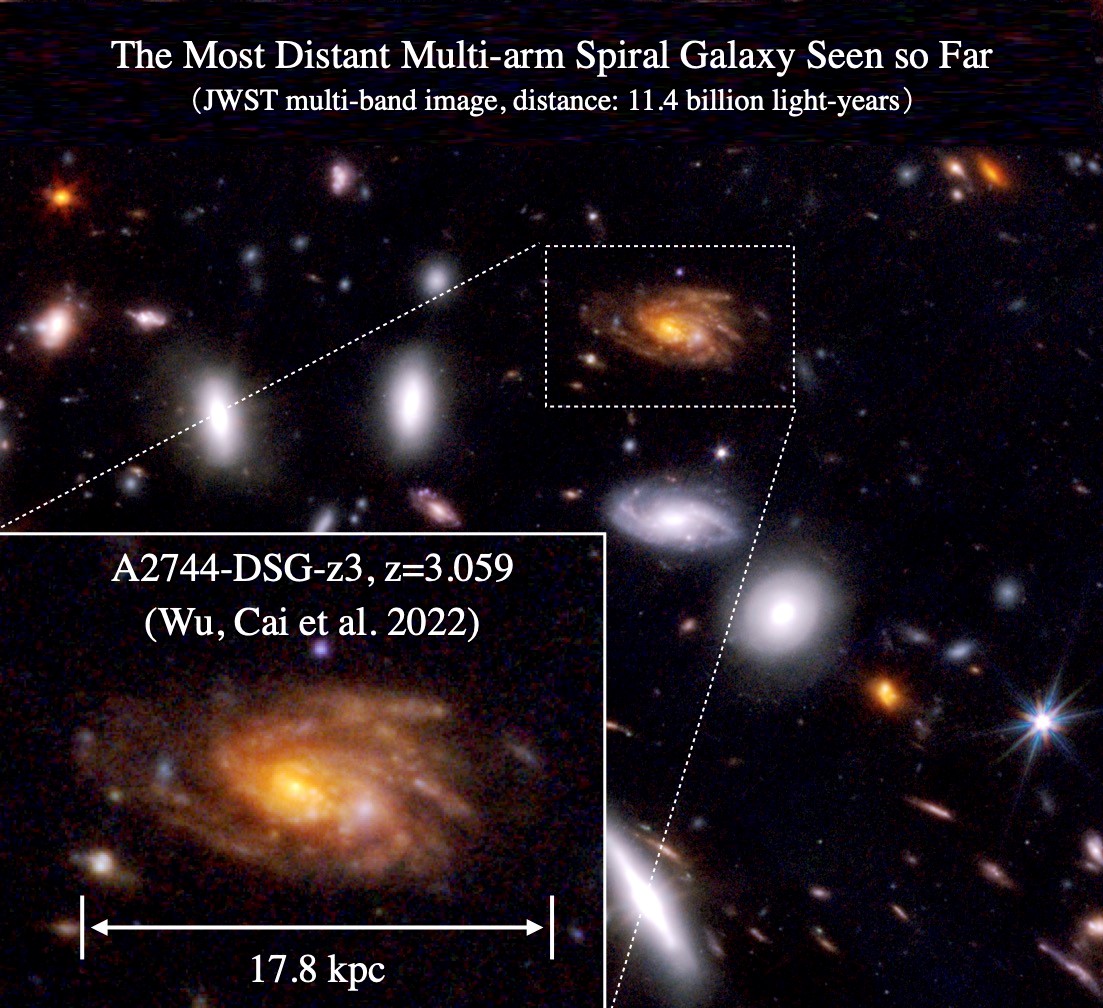 JWST multi-band-imaging observations of A2744-DSG-z3, the most distant spiral galaxy that has been seen so far. Image credit: Cai, Wu, Sun, Tsinghua University and The University of Arizona.

Spiral-like structures are widely regarded to be caused by gravitational instability, while different spirals are formed in different ways. When and how these spirals form is still a mystery. Fortunately, recently released JWST near-infrared imaging and simultaneous spectroscopic observations make it possible to search for spiral galaxies in the high-redshift universe.

The widely accepted explanation of spiral formation, the density wave theory, was proposed by C.C. Lin and Frank Shu in the mid-1960s. In this hypothesis, stars move in a regular-rotating state, which can generate a typical spiral arm structure. The observed pattern results from regions with high stellar density. 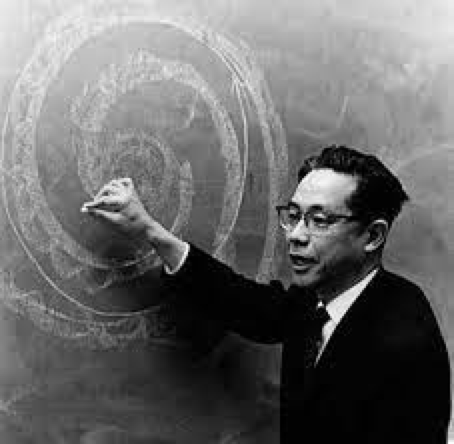 Nevertheless, early observational results suggest that high-redshift star-forming galaxies could be significantly more irregular and clumpy as their stars may have higher velocity dispersions compared to nearby galaxies. Therefore, the number of spiral galaxies in the high-redshift universe should be much rarer than that in the local universe. In the past decade, grand design spirals are identified out to a redshift z = 2.0, and flocculent types were recorded up to z = 1.4.

Surprisingly, an international group led by Prof. Zheng Cai has identified one spiral galaxy at z=3.06. This galaxy is named as A2744-DSG-z3. This discovery sets a new record for high-redshift spiral galaxies and proved that spiral-like structures already formed within two billion years after the Big Bang.

Combined with JWST and ALMA observations, A2744-DSG-z3 is located in an overdense region. This galaxy is characterized by large quantities of dust, a stellar mass of 1010.6 M_sun, and a star-formation rate of 85 M_sun/yr. The researchers also found that there is one companion galaxy close to A2744-DSG-z3 at a projected distance of ~70 kpc. The discovery of one companion galaxy along with the asymmetric brightness profile, provides further evidence for a more complicated gravitational instability. Therefore, the spiral arms could be triggered by minor merger events at z~3. This galaxy is 58000 light-years across, close to half of the diameter of our Milky Way.

This discovery has been published in the Astrophysical Journal Letters. The work is led by Prof. Zheng Cai and fourth-year graduate student Yunjing Wu from the Department of Astronomy at Tsinghua University, in collaboration with astronomers at the University of Arizona, the European Southern Observatory, the Institute of Astrophysics Faculty of Physics in Chile and Las Campanas Observatory. Other Tsinghua co-authors include postdocs Jianan Li, Siwei Zou, and graduate students Xiaojing Lin, Zihao Li, Mingyu Li, and Shiwu Zhang.