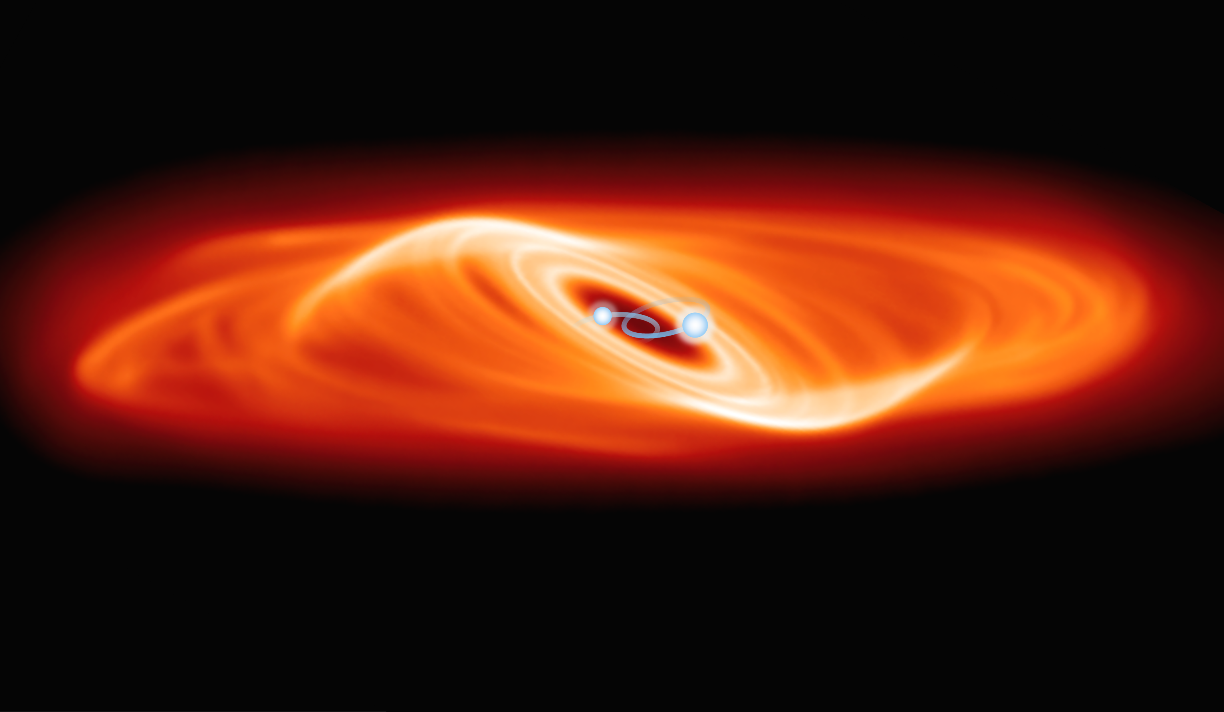 An illustration showing a binary star circled by a warped circumbinary disk. Once every orbit, one of the stars in the binary passes behind the disk and its light is blocked from our view. Image credit: Poon, Zhu, Zanazzi, University of Toronto; Sahl Rowther et al., Warwick University.

An international team led by Tsinghua astronomer Prof. Wei Zhu has identified only the second and third examples of a rare type of star system comprising two central stars orbiting each other, surrounded by an unusual disk of gas and dust that lies at an angle to the orbits of the central stars.

The discovery of the new objects, designated Bernhard-1 and Bernhard–2, is described in a paper published in the Astrophysical Journal Letters on July 4th, 2022. This study is led by Prof. Wei Zhu from the Department of Astronomy at Tsinghua University, in collaboration with two amateur astronomers in Europe and researchers from California Institute of Technology, Purple Mountain Observatory, University of Toronto, and Peking University. Other Tsinghua coauthors include recent PhD graduate Weicheng Zang and graduate student Tianjun Gan.

But there exists a class of rare binary star systems in which their circumbinary disks are at an angle to the planes of the orbiting stars. Because of this tilt, the disks wobble like a spinning top, a motion referred to as precession. As they precess, the disks move in and out between us and the stars, over periods measured in decades, causing the light of the central stars to dim. As a result, the total brightness of the binary stars varies, producing a unique light curve. Prior to the study, Kearns Herbst 15D (KH 15D) was the only known system with these properties.

The discovery of two more such systems was made when Klaus Bernhard, an amateur astronomer, analyzed data from the Zwicky Transient Facility (ZTF). The ZTF’s instrument surveys the entire northern sky every two days, providing data for countless objects over long stretches of time.

Combing through the data, Bernhard uncovered KH 15D-like candidates. He then shared his findings with Michael Poon, J. J. Zanazzi, and Wei Zhu, the three of whom recently conducted a detailed analysis of KH 15D. Further investigation and additional observations confirmed that these systems were indeed strong candidates of KH 15D-like systems. Their current names were given to recognize the original contribution from Bernhard.

The light curves of Bernhard-1 and Bernhard-2 dip to a fraction of their peak brightness — the former for 112 days every 192 days; the latter for 20 days every 62 days. These dips are the sign that one of the stars in each binary is moving behind the disk as seen from Earth. When the star re-emerges, the brightness of the system returns to normal. As the protoplanetary disk is the birthplace of planets, the discovery of such rare and exotic systems is going to be important for our understanding of planet formation.

Ongoing astronomical surveys from the ground as well as from space have been releasing massive amount of data to the general public. With the joint effort of amateur and professional astronomers, researchers are optimistic that more discoveries of such rare celestial objects will follow.

(This article is based on the original material from the University of Toronto.)

Link to the journal paper: