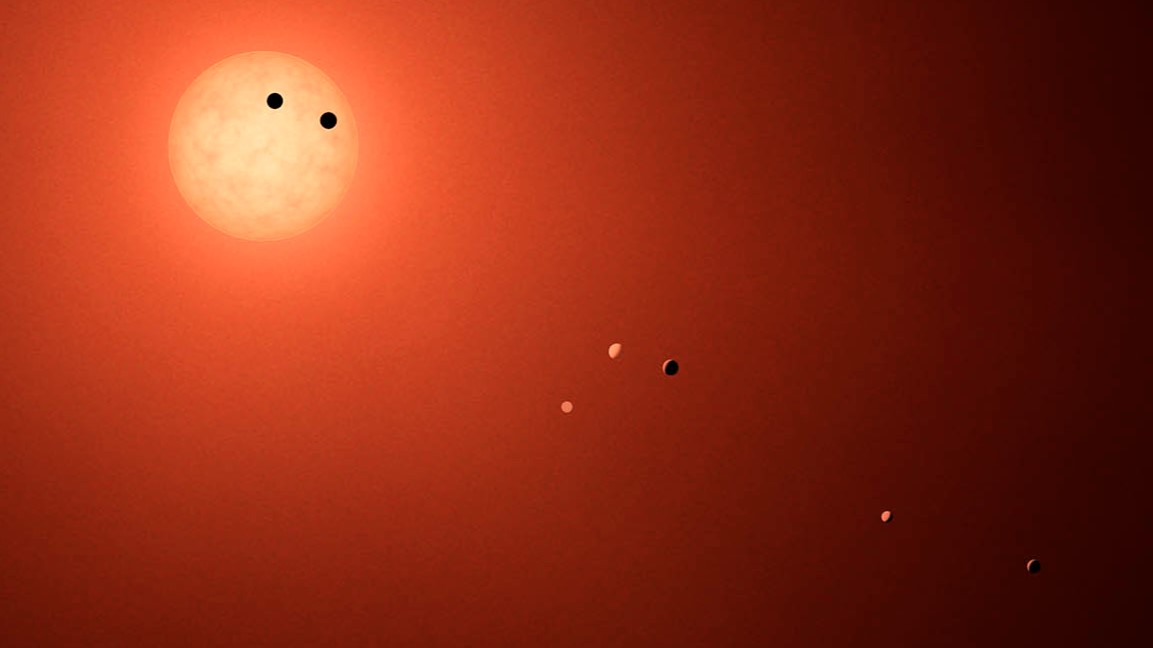 The red dwarf star TRAPPIST-1 is home to the largest number (which is seven) of Earth-sized planets ever found in a single planet system. Three of these planets may be suitable to harbor liquid water or even life and will be prime targets for the recently-launched JWST spacecraft. Different from the terrestrial planets in our solar system, scientists have determined that it is likely that the TRAPPIST-1 planets formed early in their gas-rich protoplanet disk. Planets will then migrate inwards because of planet-disk gravitational interaction until they reach the inner edge of the gaseous disk.

But why do planets not crash into each other? Mean motion resonances can trap planets during their convergent migration at locations where the orbital periods follow a ratio of integer numbers. Examples in the solar system are the 1:2:4 resonance of Jupiter's moons Ganymede, Europa, and Io, and the 2:3 resonance between Pluto and Neptune. These are examples of first order resonances. However, in the TRAPPIST-1 system, the inner two planets are captured in weaker, higher order resonances than the outer planets. There must therefore be special mechanisms that operated in this system. Indeed, the peculiar dynamical configuration has puzzled many scientists since its discovery and attempts to solve it have typically focused only on a piece of the mystery.

In a recent study, accepted for publication in the MNRAS, Huang and Ormel have studied the problem from a planet formation perspective. They propose a model in which planets form at the H2O snowline, then migrate towards the disk’s inner edge. The innermost two planets b and c enter a gas-free disk cavity early after their formation (See figure, panel a). Then, the outer planets migrate inward to join the resonance chain. Meanwhile, the spacing between planets b and c and the outer planets expand, because planet c still experiences a slight inward push from the disk (panel b). During its migration away from the disk edge, planet c can be trapped in three-body resonances at several locations, but this depends on the arrival time of the outer planets. When the outer planets arrive late, planet c will avoid the first locations and can then be trapped in the three body resonance corresponding to the location where it is presently observed (Φ4; panel c). Hence, the dynamical configuration of the seven billion-year-old TRAPPIST-1 planets was already set in the first million years after their formation.

Huang, Ormel: The dynamics of the TRAPPIST-1 system in the context of its formation

Accepted for publication in Monthly Notices of the Royal Astronomical Society: https://arxiv.org/abs/2109.10984 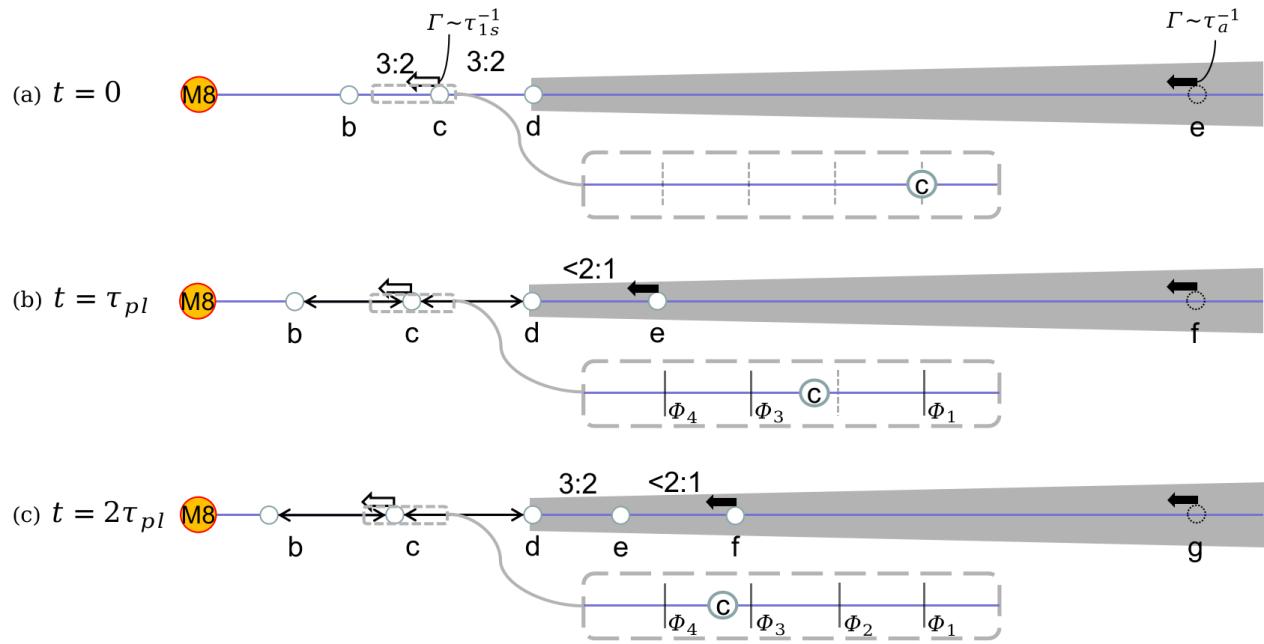 Schematic of the model. At t = 0 (upper panel), planets b and c have already entered the cavity and planet d has migrated to the inner disk edge. Planet b, c, and d are in 3:2 resonances. Planet e is still forming or migrating far out in the disk. Planet c is pushed by the gas disk inward. After a planet formation timescale τpl (middle panel) planet e enters the resonant chain. At this point, planet f is forming or migrating in the outer disk. After 2τpl (bottom panel), planet f ends up in the 3:2 MMR with planet e. Similarly, planet g and h follow, getting trapped in 4:3 MMR and 3:2 MMR, respectively. In each panel, we zoom in on the region around planet c and indicate the four locations where planet c can be captured in a three-body resonance. However, these traps come into existence only when planets d, e, or f have arrived. At early times some of the traps may therefore not yet exist (dashed vertical lines; unlabelled), allowing planet c to cross these locations.